Based on the guideline whitepaper, we should be able to assign the Power BI pro license to guest user through Office 365 admin portal.

Here is the scripts for assign Power BI license:

The {User principal name} is the guest account name of the invited external user. You can find it on the Username field of the guest user on Office 365 admin portal.

The -UsageLocation parameter in the Set-MsolUser cmdlet specifies the location country of a user with a two-letter ISO code. You can lookup the country code through this link: https://en.wikipedia.org/wiki/ISO_3166-1_alpha-2.

The -AddLicenses parameter in the Set-MsolUserLicense cmdlet specifies the license to assign to the user which consists two part: {Tenant Name} (the name of the tenant) and POWER_BI_PRO (license code for Power BI pro).

GMROI (Gross Margin Return On Investment) is one of the most popular metrics, commonly used in retail industry, for inventory management. Retailers are short-term investors and the “buy and hold” strategy does not work in retail industry. Instead of having the cash frozen in inventory, it is crucial to keep cash flowing to continually purchase, mark up, and sell in order to generate profits and expand the business. GMROI is a profitability metric that helps a retailer to analyse how efficiently the inventories are being converted into cash.

Gross Profit is calculated by subtracting the COGS (Cost of Goods Sold) from the revenue:

Inventory cost is a semiadditive measure as it is not additive on the date dimension. Average Inventory Cost is calculated by dividing the sum of the inventory cost over a specified period by the total number of days of the period:

Due to the semiadditive nature of the inventory measures, the GMROI analysis in a BI solution is normally conducted on a periodic snapshot data model, including an inventory fact table, a date dimension table, and a number of other dimension tables that are applicable to the analysis, such as vendors, stores, and products.

The snapshot below shows a sample data schema for GMROI analysis, created in Power BI. The design of the data schema can be variant, depending on the retailers’ specific business rules and LOB database design. You can download the demo pbix file here.

The Inventory table in the sample data schema records the daily snapshot of the inventory level,  the quantity of sold products, inventory cost and retail  price of the products over the vendor, store and product dimensions.

To create the Gross Profit measure, we can calculate the gross profit for each sold item and multiply it by the quantity of items sold in a day. We can then use the SUMX function to roll-up the total gross profit, depending on the evaluation context.

To create the Average Inventory Cost measure, we can sum up the inventory cost of all days in a period and divide it by the number of days in the period.

The GMROI measure can be used in different evaluation context depending on the specific requirements of the GMROI analysis. For example, we can use the measure to calculate the annual GMROI of the products from Vendor A and sold at Store X.

In this blog post, we will still use the Eurovision dataset as example that contains the rows of country-to-country votes for each year.

We will create four measures, including “Rank”, “In Top N (This Year)”, “In Top N (All Selected Years)”, and “All Selected Years in Top N”. These measures will be used in an evaluation context made of the combination of each year and each country. To build the evaluation context, we can use a Power BI table visual and add the “Year” and “ToCountry” columns from the Eurovision dataset to the table. The four measures will be added to the table later that evaluates the rank and whether in top n of each country in each year.

The first measure to create is the “Rank” measure that computes the ranks of the countries in each selected year.

Measure – In Top N (This Year)

Based on the “Rank” measure, we will create the “In Top N (This Year)” measure that compute whether the current country is ranked in top n in the current year-country evaluation context. Here we need to allow users to dynamically specify the N (the number of top items) to evaluate. We can achieve that using a disconnected parameter table that defines the options for the N.

In the DAX measure, we can get the user selected N value using VALUES function which will be compared to the “Rank” measure we created earlier to evaluate whether the current country is in top N in current year context.

We will then filter the table using the “In Top N (This Year)” measure that only keeps the countries ranked in the top N in at least one of the selected years. 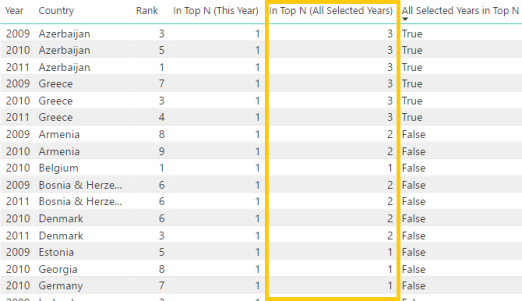 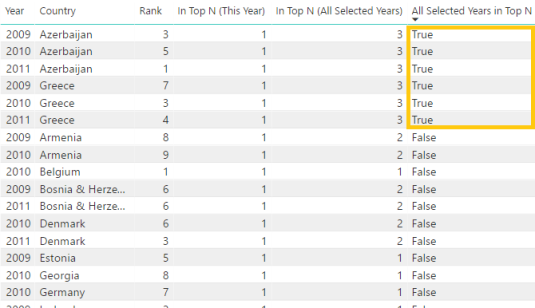 Update – I have suggested another approach here that allows users to dynamically specify the periods and the number of top items to evaluate, using the interactive dashboard slicers.

When analysing the best performers against a specific measure such as the best sold products, we sometimes need to take multiple periods into consideration. For example, we want to find the products that are not only ranked in Top 10 in this year but also in the other years. This blog post introduces how to achieve this type of calculations using DAX.

Here we will use Eurovision competition dataset as the example to compute the countries that are ranked in top 10 for both year 2015 and 2016.

The Eurovision competition dataset contains the rows of country-to-country votes for each year.

The DAX script above will return the three countries which are ranked in top 10 for both year 2015 and 2016.

We can use the SUMMARIZECOLUMNS funciton combined with the RANKX function to computer the rank for all the countries and then use the NATURALINNERJOIN function to inner join the set we created earlier for computing the countries ranked in top 10 for both year 2015 and 2016.

Since Power BI started to support R visual, it has become difficult to criticise Power BI’s visualisation capability because we can now take full advantage of R’s powerful visualisation packages such as ggplot2 to create Power BI reports. Unlike creating Power BI custom visual which is a rather time-consuming task, we can create eye-catching charts in just a few of lines with R visual.

Facet grid is a popular chart type but is not supported by Power BI yet. However, we can easily build a facet grid chart with the help of ggplot2 package.

Firstly, we need to get our data into the right format. In this example, we use the Eurovision competition dataset which contains the voting records between 1975 to 2016. 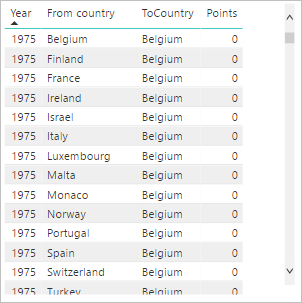 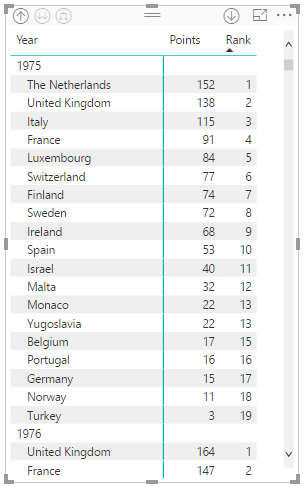 Now we are ready to create our facet grid visual. We add a R visual to the Power BI canvas and add three columns, Year, ToCountry, Rank, to the visual.

On the R script editor, we first reference the ggplot2 library and then create a ggplot object placing Year on x-axis and Rank on y-axis. The key step is to add facet_wrap(~ToCountry) that generates the facet grid by voting destination country (ToCountry column).

The grid facet looks pretty neat as all sub-panels are perfectly aligned, however, it fails to display the geospatial information of the countries that may reveal some useful insights. For example, in my last blog post , I built a voting network chart of Eurovision competition that has revealed the mutual high voting scores between some neighbour countries.

There is a R package, namely geofacet, which comes with a list of pre-built geospatial grids for a number of geographical areas, countries and states. One of the pre-built grids is for Europe area which is perfect for our Eurovision example.

It is very straightforward to use the geofacet package. After referenced the package in our R script, all we need to do is to replace the facet_wrap function in our ggplot2 code with the facet_geo function provided by the geofacet package. We need to specify the column by which the facet is divided and the name of the pre-built grid we will use. In this example, we use “eu_grid1” which is the grid for Europe area.

Now we have done all the work to convert our standard grid facet to geospatial facet. 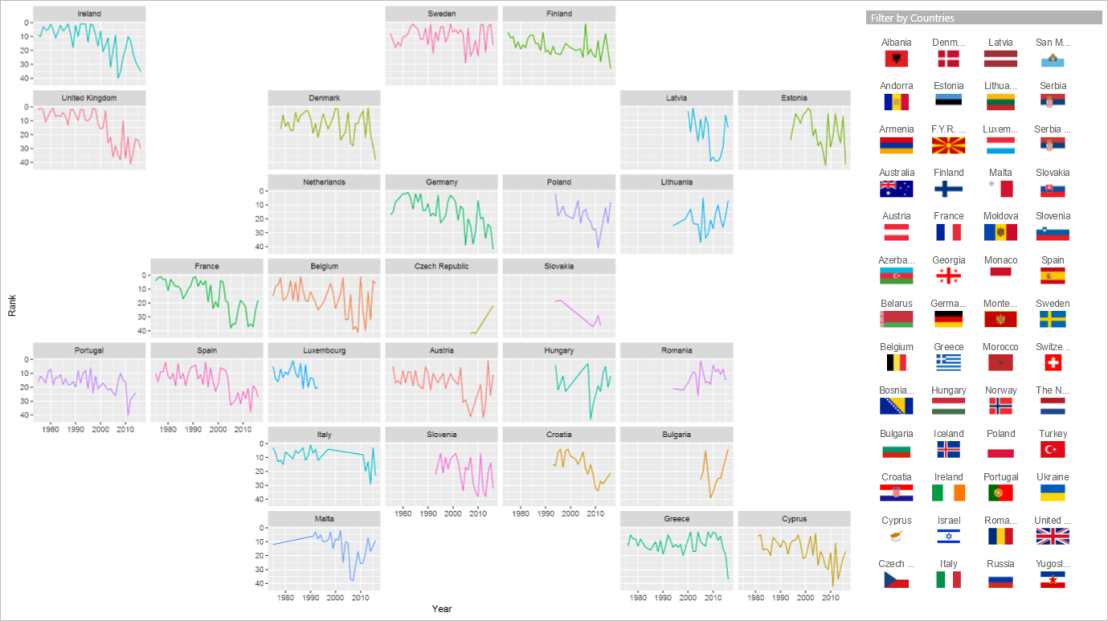 Apart from the Europe area grid, you can find a list of other pre-built grids here. Considering where I am living at this moment, another pre-built grid I am particularly interested at is the London Borough grid. This is a geo-facet chart I have created to visualise the unemployment rate in the London boroughs.

You can also create your own grid which is literally a data frame with four columns, name and code columns that map to the facet label column in the dataset, and the row and col columns that specify the grid locations.

This is a test grid I have created to demonstrate how to create custom grid: 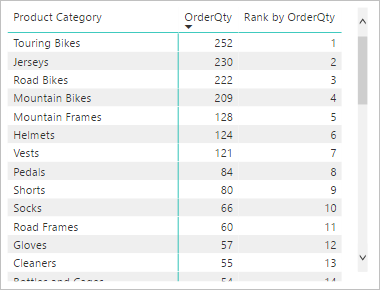 This measure will normally work fine until we drill the product hierarchy down to next level. As the rank measure is calculated at the parent-level, it will not work at the child-level. 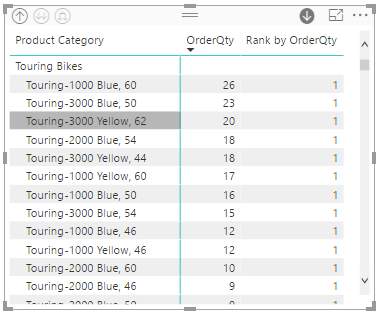 To ensure the rank measure working at both parent-level and child-level, we need to calculate the rank accordingly depending on the what level the current filter context is at. We can use the DAX ISFILTERED function to evaluate current level.

In the example below, we created two measures, [Category Filtered] and [Product Filtered], using the ISFILTERED function. At the product category level, we can see only the Product Category column is filtered.

When we drill the table down to the product level, both product category and product columns are filtered.

We can now create a single measure to return the correct rank at both hierarchy level:

We first use the ISFILTERED function to evaluate which level is the current context at and then use the RANKX function to calculate the ranks accordingly. As the snapshot below shown, the rank will work fine at both levels. 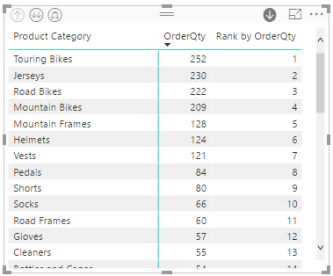