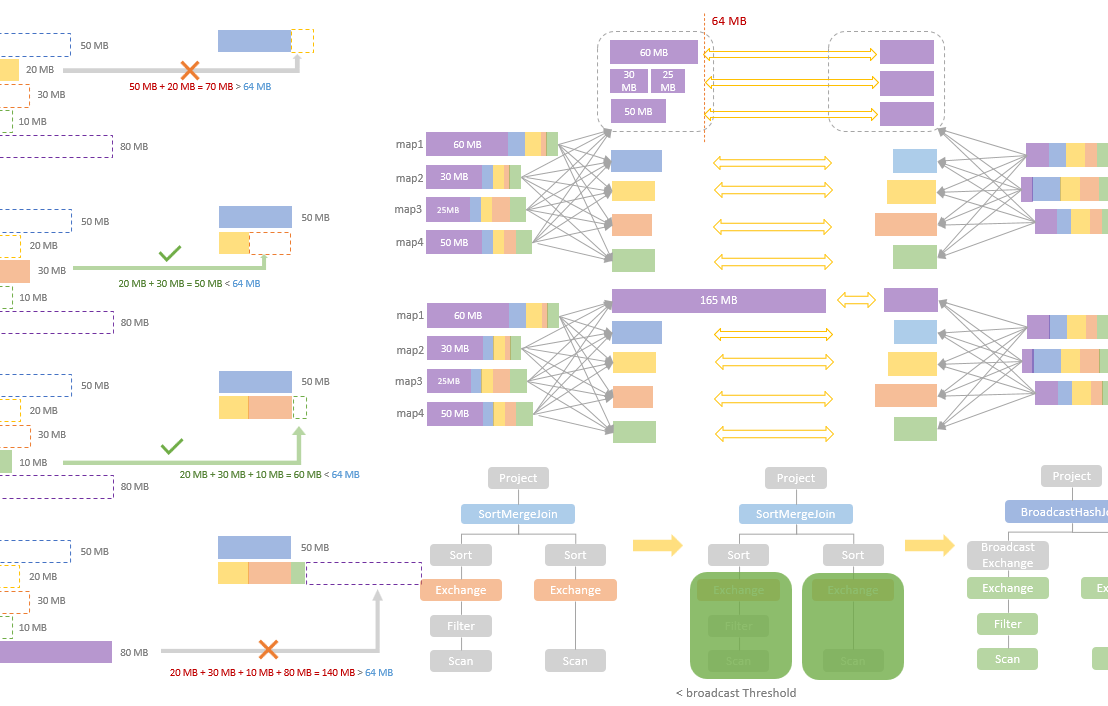 In the previous blog post, we looked into how the Adaptive Query Execution (AQE) framework is implemented in Spark SQL. This blog post introduces the two core AQE optimizer rules, the CoalesceShufflePartitoins rule and the OptimizeSkewedJoin rule, and how are implemented under the hood.

If you have been working with Spark for some time, you might get familiar with the number, 200. There seem always 200 tasks running no matter how small is your data. As you can see from the following example, 200 tasks are there to process a very small dataset, with less than1kb of data for each task.

The number of shuffle partitions could affect Spark performance significantly. With too less shuffle partitions, each partition contains too much data that overstretches the tasks and counteracts the benefits from parallelism. When memory is not sufficient for processing that much data, disk spills might be triggered which causes expensive I/O operations, or OOM occurs to kill the job. On the other hand, too many shuffle partitions lead to too many small tasks that causes too much overhead on task scheduling and managing.

Therefore, the shuffle partition number needs to be dynamically adjusted through the job execution pipeline, according to the data volume at the specific stage at runtime. This is exactly the use scenario where AQE can help. AQE splits a Spark Job into multiple query stages and re-optimise the query plan of downstream query stages based on the runtime statistics collected from the completed upstream query stages. The CoalesceShufflePartitoins rule is the AQE optimizer rule created for dynamically configuring the shuffle partition number. This rule coalesces contiguous shuffle partitions according to a target size of the output partitions. For the example used above, if we enable AQE and rerun the same query, we can see there is only one task created this moment. As the entire dataset used in this example is very small, only one partition is required.

With the target size ready, the CoalesceShufflePartitions rule can start to coalesce the partitions according to the target size and to define the coalesced partition specs (CoalescedPartitionSpec) which will be used to create shuffle reader later. Let’s use an example to explain this process. As the diagram shows below, we have a shuffle operation with two input partitions on the map side. When the CoalesceShufflePartitions rule is not applied, the shuffle data are read into five output partitions, even though some of them are small.

The CoalesceShufflePartitions rule moves on to add the second and the third partitions, resulting at 50MB which is smaller than the target size.

The attempt to add the fifth partition ends up a partition size (140MB) which is over the target size. Therefore, the second, thrid and fourth partitions are coalesced into one partition (60MB). A CoalescedPartitionSpec object is created which has the startReducerIndex as 1 and the endReducerIndex as 5.

As there is no further partition to process, another CoalescedPartitionSpec is created for the last (fifth) partition. Eventually, we have three output partitions now including the one made up with the three small partitions.

Internally, the getMapSizesByExecutorId method of MapOutputTracker is called to get the metadata of the shuffle blocks to read, including block manager id, shuffle block id, shuffle block size, and map index. A BlockStoreShuffleReader is then created, which initialises a ShuffleBlockFetcheriterator for conducting the physical read operations to fetch blocks from other nodes’ block stores.

We then enable the AQE with the dynamic skew join optimisation applied and rerun the same query again. As the skewed partition has been split into multiple small partitions, the largest partition is now 234MB and it takes 29 seconds to run the partition. Thanks to the increased parallelism, the total job execution time is reduced from 7.7 minutes to 1 minute.

The OptimizeSkewedJoin rule is the AQE optimizer responsible for dynamic skew join optimisation. At a high level, this rule splits a skewed partition and replicate its matching partition on the other side of the join so that more tasks are created to do the join in parallel to avoid straggler tasks which slows down the job completion.

Internally, the OptimizeSkewedJoin rule first checks whether or not the join to optimise is either a sort merge join (SortMergeJoinExec) or a shuffle hash join (ShuffledHashJoinExec). Only these two types of join are supported by the OptimizeSkewdJoin rule in Spark 3.2.

After the skewed partitions are found, we can then calculate the target size of the split partitions which is either the average size of non-skewed partition or the advisory partition size (spark.sql.adaptive.advisoryPartitionSizeInBytes, default 64MB) depends which one is larger.

Now the OptimizeSkewedJoin rule has the list of PartialReducerPartitionSpecs ready for creating the physical AQEshuffleReadExec operator. The remaining steps for physical shuffle blocks readings are mostly same as the steps mentioned earlier for coalescing shuffle partitions. The main difference is that the shuffle reader created by the OptimizeSkewedJoin rule specifies the startMapIndex and the endMapIndex for the list of map outputs to read.