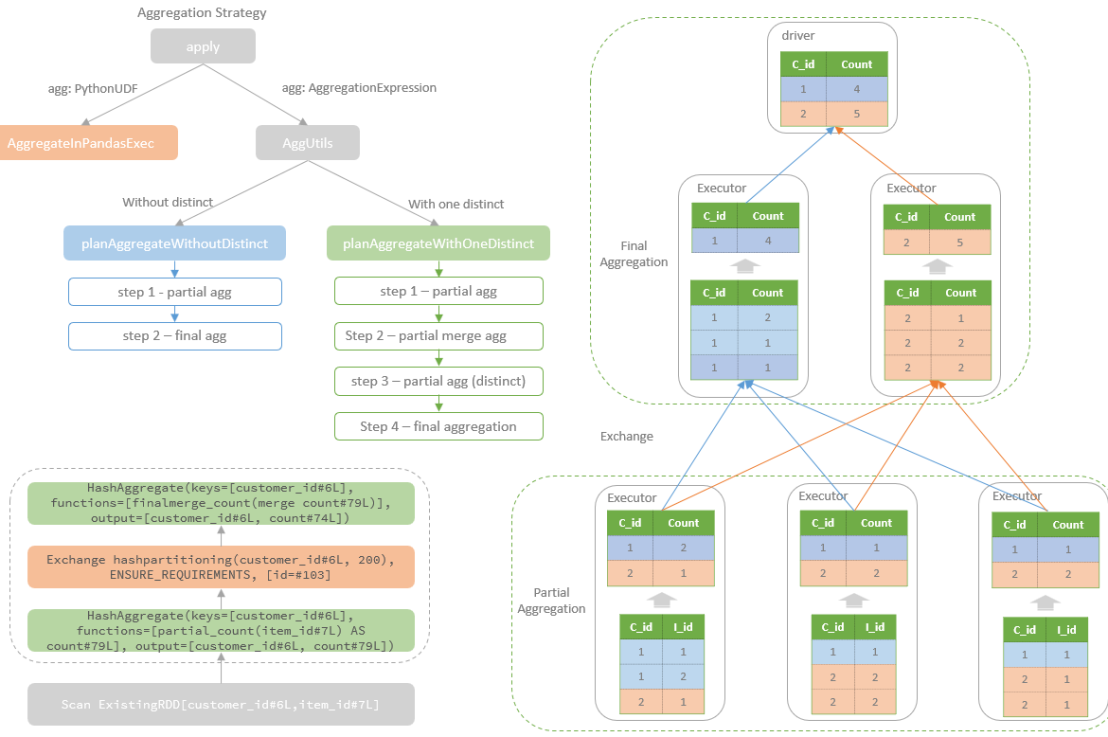 In the last blog post, I gave an overview of the SparkPlanner for planning physical execution plans from an optimised logical plan. In the next few blog posts, I will dig a bit deeper into some important strategies. I will start with the “Aggregation” strategy in this blog post.

As the diagram below shows, if the aggregation expression is an instance of PythonUDF, an AggregateInPandasExec node will be returned, which is a physical node for aggregation with group aggregate Pandas UDF. AggregateInPandasExec works by talking to the python worker which executes the Pandas UDF and sending the results back to the Spark executor. The Spark executor then evaluates the post-aggregation expressions and returns the results.

For the case that does not contain Distinct aggregation, a two-stage aggregation execution plan is returned. Taking the following query as an example, this query groups the order rows by customer_id and have a non-distinct count aggregation on item_id.

This is the optimised logical plan which contains an Aggregate logical operator.

The query plan above can be represented by the following diagram, which hopefully is easier to understand.

As the diagram shows, at the first “partial” aggregation stage, each partition of the RDD is grouped by the customer_id with the outputs of the count of the item_id for each customer within that partition. Then, the outputs of the first “partial” aggregation stage will be shuffled by the customer_id, i.e. the RDD is repartitioned so that the rows with the same customer_id will be placed in the same partition and executed in the same Spark executor. The second “final” aggregation then adds up all the item_id count for each customer and return the final results to the driver.

Aggregate with One Distinct

The Spark implementation of the Distinct aggregation is a bit more complex that involves four aggregation stages and two shuffle operations. Let’s make two small changes to the query we used earlier. Instead of COUNT(item_id), we add a DISTINCT operator and make it as COUNT(DISTINCT item_id). In addition, we add another aggregation expression, SUM(price).

Here is the physical plan returned by the Spark Planner. As we can see, four HashAggregate stages are planned.

At the first stage, “partial aggregation”, each partition of the RDD is grouped by the customer_id and the item_id. At this stage, the aggregation is only conducted to the non-distinct agg expression (i.e. SUM(price) in our example) within each partition.

In our example above, HashAggregate operator (HashAggregateExec SparkPlan) is used. Spark SQL also provide some other aggregation SparkPlans that are used for different scenarios and come with different performance. I explain them in detail in the following blog posts.